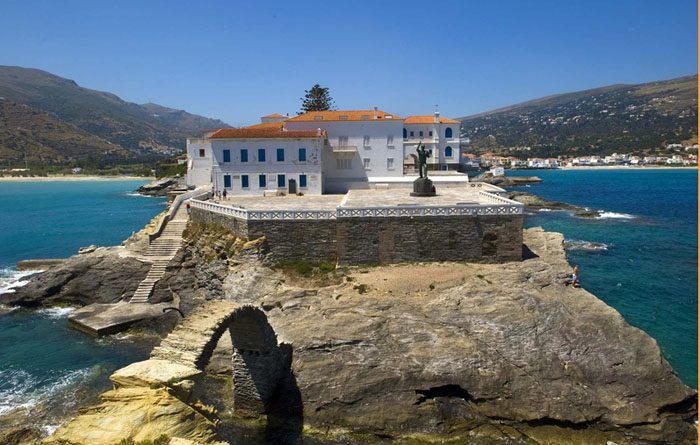 Andros, the second biggest Cycladic island after Naxos in Greece, extends over a surface of 374km2 and is only two hours away from the port of Rafina, and not much further from Athens. It is a northern-situated island which has a great sailing tradition and fantastic landscapes with rocky coasts, mountain ranges alternating with abundantly flowing streams and flowered plains.
The island is full of secrets that are only waiting for you to discover them. Among them are the lighthouse of Fassa, the numerous and charming old watermills, the village of Ano Korthio, the strait between Tinos and Andros, or even witnessing spring in Pythara. Island hopping in the Cyclades is a wonderful occasion for you to discover those secret treasures that the archipelago has to offer to those daring exploring it.
The houses of its capital, Hora, are a witness of a subtle combination of medieval, neoclassical and traditional style. Its remarkable churches, museums, small shops, cafes and restaurants will ravish you if you wih to dive into the greek culture. The Frankish castle from the 13th century, which was built on a smaller island linked to Andros, is a must see as well. If you enjoyed visiting the castle, you might as well appreciate the architecture of the monasteries of Zoodóchos Piyí, and Panayia Tomarhiani.

Paleópolis, which used to be the capital of Andros, remained very influencial from the classical to the late roman times. The fortified settlement in the Neolithic times with hand paintings on the rocks representing animals, ships and linear designs never cease to fascinate our history-fans visitors.
The world-wide famous Museum of Modern Art, managed by the Vassilis and Eliza Goulandris Foundation, is the proud owner of wonderful collections of paintings and sculptures, whereas the archaeological museums in Hóra and Paleópolis represent the antique history of Andros. The Cyclades Olive Museum will allow you to know more about the pre-industrial, animal powered, olive oil producing unit in Greece.